When my parents told me that we were going outside this evening, I first was quite annoyed because they didn’t tell me where we were going to. When we arrived, I could hardly believe my eyes! There was a big area like for a festival with stand, a big stage and also some places where you could play games. The whole event was named “Mangupura” and was the birthday celebration of our Badung Regency. If you manage to do it, you can win cool prizes!

Since there was still daylight, I first wanted to enjoy some games. In one, you had three metal discs which you needed to place on a red dot and the condition to win was that the red dot was completely covered by the three metal discs. Sounds easy? Well, it’s not easy at all! Quite the contrary. 😀 I try mounting the bottle

The next game I tried seemed easy, too but turned out to be just as challenging as the first one. They gave me a thin rod with a plastic ring at its end. With that rod, I needed to mount a glass bottle which was lying on a pedestal. Sounds easy again? Let me assure you that it really is not easy at all. Probably also due to the fact that the rod is very thin and elastic and so is the cord with which the plastic ring is attached to the rod.

That game looks very easy but it isn’t easy at all!

Every time that you manage to move the plastic ring over the bottle’s neck and start pulling, the whole thing first resists and then, all of a sudden, snaps the bottle upright with too much strength and makes it fall over. Lost 🙁 The event area is filled with stands and a stage

It was very nice exploring the whole event area as there were a lot of stands selling food or traditional products from each “village” of the South Kuta area. All the Banjars are presenting their gongs

While we were exploring the area, all Banjars of Jimbaran were holding a presentation of their gongs and dances on the stage. It was very impressive! My friend Ostra is great at playing this game!

In the evening, my friend Ostra and his dad Kadek joined us and we played some games together. Can you imagine that Ostra was so brave in this game that he won almost every time and the stand owner already started to look a bit annoyed because Ostra emptied his prize bucket? 😆 😆

Let’s have some fun on the trampoline

It’s so much fun playing here!

Later, we decided to have some fun on the trampolines that were installed. Due to safety reasons, the owner divided the participating kids by age/size and so I could not jump together with my friend Ostra. But I met new kids to have fun with instead. I guess I’m a bit overheated…

When I climbed off the trampoline, my parents almost dropped dead when the saw me. They said that I had a head red like a lobster or a fire extinguisher… well, I actually felt a bit overheated after all the jumping… 😆 😆 Ostra is enjoying a delicious sausage on a stick

Ostra had become hungry, too and so he enjoyed a delicious grilled sausage on a stick. I tried one myself and it was very tasty! 😛

While we were eating, there were more cultural presentations going on. Afterwards, the politicians of our Regency presented the achievements and goals and there even was a balinese comedy show which I enjoyed very much! But then, finally, the best part started: The music concerts! All the acts were very good but I could hardly wait until the band for which my parents had actually come here, climbed on stage and started performing: Lolot. Their music was absolutely great! I had never imagined Balinese Rock/Punk to be so cool! I’m enjoying their music very much!

Everybody was having a great time! Can you imagine that we could even go backstage and enjoy the sound directly from besides the stage! 😯 It was SUUUUPER-COOOOL! For me, it was almost like the concert of the Toten Hosen in Zurich last November: The music was great but the experience of being so close to everything was absolutely breathtaking! 😯 I’m posing with Lolot’s drummer! That guy is cool!

When the concert was over at midnight, the drummer invited me to take some pictures with him. Aren’t we cool! 😎

We also made a little movie for you to enjoy the atmosphere and the cool music of the evening: 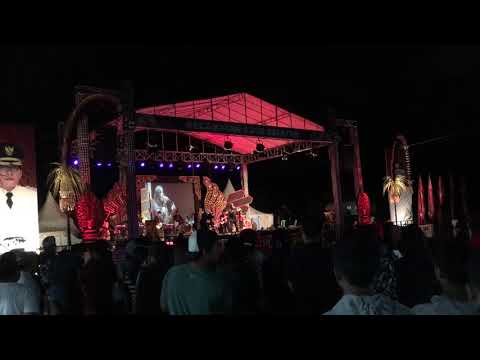 I can hardly wait to see Lolot’s next performance!

One thought on “An amazing evening!”

Just a selfie with a friend... #passionpassport #t