The temple in the forest looks a bit spooky

This all reminds me a bit of Indiana Jones

Since we had woken up so early, we had plenty of time to explore our island on our last day. By chance, we came by a little forest which was full of temples. It was an amazing atmosphere that somehow reminded me of the Indiana Jones Movies.

The cow is enjoying the fresh grass

So many palm trees!

Close to the forest, there were huge fields with many palms on them and some cows were enjoying the fresh green grass that was growing there. 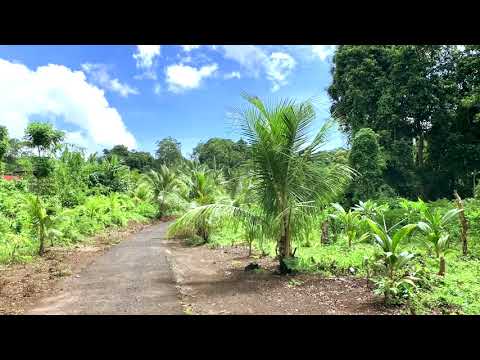 The atmosphere was wonderful. Just listen to the sounds in our little movie. Look at this tall tree!

We also saw this tall tree. I think I never seen a tree which was as tall as this one. Of course it grew inside a temple. Or the temple had been built around its roots? Who knows…

The Guru built these statues and the fountain

He even made these statues and many more

Our next stop brought us to the spiritual oasis of a very nice Guru. It was an amazing spot! The Guru and its helpers had found several trees which are attributed to the Hindu gods and Buddha and so they had build a small oasis with the statues of the goods next to their trees. They had done all by hand. Not all statues were finished but they had also built a very beautiful fountain. We enjoyed a nice cup of coffee with the Guru and its helpers and he even offered us to try beetle nut.

A delicious Nasi Campur for lunch

The best Babi Gunling ever for dinner

For lunch, we had a delicious Nasi Campur at the harbor and since this was our last day on the island, we couldn’t resist having the best Babi Guling for dinner. What an amazing atmosphere

As the weather was changing when the sun was about to set, the sky was illuminated in amazing colors when we drove home.

Just a selfie with a friend... #passionpassport #t

One of the many moments of the ngaben... #passionp